Instagram is extending it’s carousel format to organic posts and expanding it to include 10 photos or videos. Now the number of photos and videos that brands can include in their slideshow-like carousel ads have increased and is opening up the format to organic posts, announced by the Facebook-owned company on Wednesday.
As the update rolls out to iOS and Android users over the next few weeks, advertisers and regular accounts will be able to pick up to 10 photos and videos to include in a single post that people can swipe through horizontally. While both groups will be able to pick out the order of the photos and videos in a carousel post or ad, advertisers have the option to leave the ordering up to Instagram, whose technology will sort the content based on performance, from highest to lowest.
Earlier today ESPN’s @sportscenter account used the carousel format which gives us a great idea of how closely this new format resembles Instagram’s Story format, which was originally taken from Snapchat last year but has not been incorporated by Instagram in it’s traditional main feed. While it seems like it would be easy for Instagram to insert ads within the organic carousels as it does within Stories, an Instagram spokesperson said the company has no plans of doing this at this time. 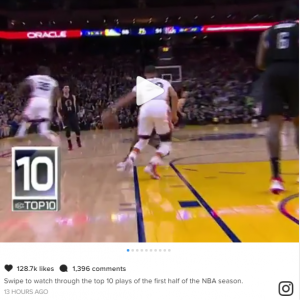 At this moment the tradeoff is that the included multiple photos or videos in a carousel can not be landscape photos or vertical videos . For now, the photos or videos have to follow the Instagram’s traditional square format.
To make it easier to identify carousel posts on an account’s profile page, Instagram will add an icon to the posts’ thumbnails to label them, like it does with video posts.
Source: Marketing Land (http://mklnd.com/2mnBrg0)